Cute pics cuz that’s all we got right now! 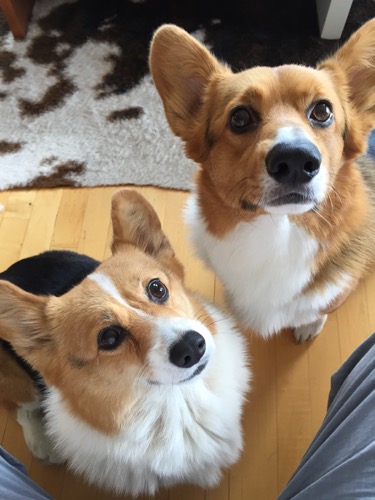 This year is really flying by.  So fast, that our last post covered the Xmas holidays!  Ugh!  So, it order to maintain our SEO ranking, yeah right, here is our latest on just cute pics of Hambone, Cupcake and Wolfgang.  I mean, what more can you ask for?  Its about cute pics, and that’s about it!

We even were featured on the Animal Planet blog!!!  I mean, it doesn’t get better than that, does it?  Thank you Animal Planet!

Wolfgang just being his handsome self, as usual.

Hambone in his favorite positions.  He loves his sunsets…

And, the crowd favorite, Cuppy!  She was told to lose 2 pounds.  Geez.

This cute pic came out really nice.  At least, we think so.  Their eyes are so dreamy.

We hope to post more often cuz 2015 is whizzing by.  We know we’re lazy and have crazy day jobs…

NEW IN THE SHOP
BUY A POOP BAG DISPENSER NOW!!!

Everyone’s having a nice time! SOUND ON! Someti

Working from home has its perks. If you consider

Hello corgi nation and pet lovers! I need some ad

Dr Pimple Popper’s got nothing on corgi plucking

Heyyyy. Life is changing everyday. But it’s be

One of the fun things about corgis! The begging fo

My babies waiting for me to get home...☹️ sinc